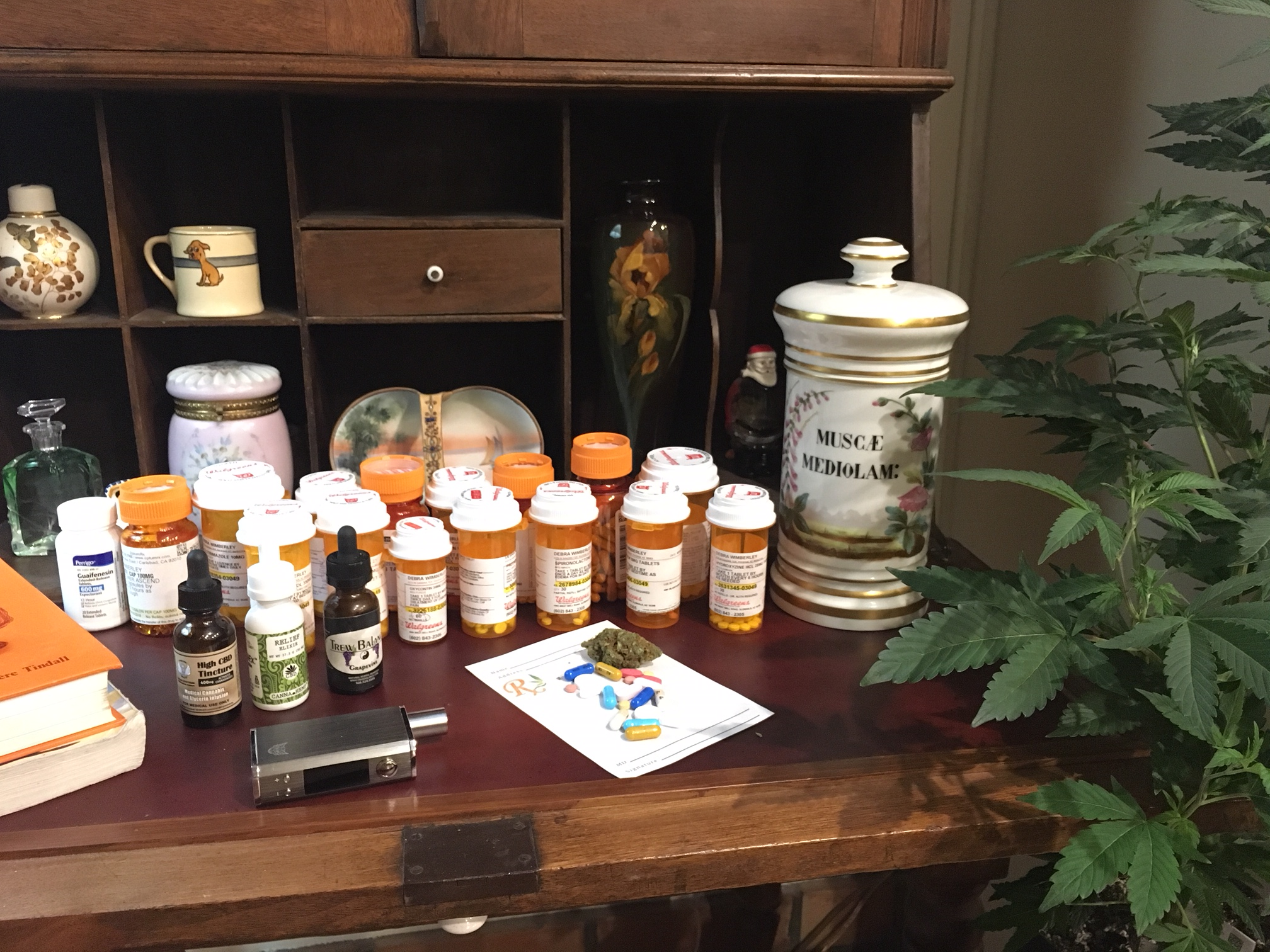 As a Pharmacist living with MS, medical cannabis has helped me with spasticity, pain, and sleep along with many other things. I have wondered how cannabis interacts with other medications and come to find out cannabis (THC and CBD) is metabolized by the Cytochrome P450 system, specifically the CYP2C9, CYP2C19, CYP3A4 and CYP1A2. THC and CBD are metabolized differently by the Cytochrome P450 system so they interact with different medications. I will go over some of the more common interactions that people may encounter.

The Cytochrome P450 system is a family of enzymes in the liver that metabolizes most of the drugs we consume. THC is metabolized by CYP2C9 and CYP3A4. Inhibitors of CYP2C9 increase the plasma concentration of THC. Some examples of CYP2C9 inhibitors that could increase the levels of THC include amiodarone, cimetidine, metronidazole, fluoxetine, fluvoxamine and fluconazole. CYP3A4 inhibitors including ketoconazole, clarithromycin, erythromycin, cyclosporine, verapamil, itraconazole can also increase THC level (1). Rifampin a CYP3A4 inducer has been reported to reduce THC levels. When cannabis is smoked it activates the CYP1A2 which can increase the metabolism of theophylline and chlorpromazine by up to 50% (2). It has been shown to affect the levels of warfarin at doses of 4 to 5 joints per week (3).

CBD is metabolized by cytochrome P450 enzymes CYP3A4 and CYP2C19 while also functioning as a “competitive inhibitor” of the same liver enzymes. By competing for the site of enzymatic activity, CBD prevents cytochrome P450 from metabolizing other compounds(4). The extent to which CBD behaves as a competitive inhibitor of cytochrome P450 depends on how much CBD is administered and whether isolated CBD or a whole plant remedy is used. GW Pharmaceutical’s Sativex, a whole plant CBD-rich sublingual spray, found no interactions with CYP enzymes when approximately 40mg of CBD were administered. CBD has the ability to lessen or neutralize the THC high. That’s because CBD slows down the conversion of THC into its more potent metabolite, 11-OH-THC by acting as a competitive inhibitor. By doing this THC remains active for a longer duration, but the peak of the extended buzz is blunted somewhat under the influence of CBD (5).

So just like how grapefruit can affect how your prescriptions work by either increasing the level or decreasing the level of the drug in your body so does cannabis. Doctors and Pharmacists need to become educated on the pharmacokinetics of using cannabis so they can make patients aware of these drug interactions. More and more people are using cannabis ranging from children trying to control their seizures to the elderly trying to help with pain and sleep. The more we know about this medication the safer we all will be. That is what Effective Cannabis is all about: learning, teaching and working together to find as much out as we can about this medicine that is helping so many people. I would like to do a follow-up blog to this one going over some common medications that people take and how they are affected by using cannabis. If you have any questions about medications that you are on you can submit them to [email protected] I’ve been volunteering at Effective Cannabis for a couple of months now.

Note: “Our Pharmacist do not dispense medical advise only their opinion on research reviews they have done. Always check with your physician before adding cannabis as a medication.”

If you have questions or feedback about this, please use our Contact page.

Search by specific medical condition to learn how cannabis is advancing treatments and what studies are continuing to discover to advance health improvement.

Be sure and check out Study Members personal shared stories that supports current research.